Which three actions should you perform in sequence?

Contoso, Ltd., is a software development company. Contoso has a main office in London and two branch offices, one in Madrid and the other in Dublin. The company is in the process of adopting Microsoft Azure to host business critical resources and applications.

Contoso has an Active Directory Domain Services (AD DS) domain named contoso.com. All devices in the three offices are members of the domain. Each office has a dedicated organizational unit (OU) in the root of the domain named London. Madrid, and Dublin, respectively. Each office OU has three child OUs named Computers, Users, and Groups.

You have a GPO named RemoteSales that uses a WMI filter. The GPO prevents users from launching applications that are not approved.

Users in the finance department use a client-server application named App1. App1 uses custom Active Directory attributes to store encryption keys. App1 is a business critical application that must be migrated to Windows Azure.

The disk configuration for SERVER2 is shown in the following table:

The disk configuration for SERVER1 is shown in the following table:

The Contoso management team plans to increase the use of Appl. To accommodate these plans, the size of the datable must be increased

All DNS servers must be placed in a physically secure location.

All software developers must migrate their servers and workstations to the DNS domain lab.contoso.com to ensure that frequent changes to DNS do not interfere with the production environment.

You have the following requirements:

• The size of the database for App1 must be increased to 8 TB.

• The encryption keys for App1 should not be replicated to the offices where physical server security is not guaranteed.

• The amount of disk space that is used by Windows Azure must be minimized.

You have the following requirements:

• The lab.contoso.com DNS domain zone must not be replicated or transferred to DNS servers outside of the London office.

• A new DNS domain zone named research.contoso.com must be deployed for users in the research department.

• All computers in the London and Madrid offices must install Windows Updates from the server WSUS1.

• A new domain controller for the contoso.com domain must be deployed in the Madrid office.

• Replication traffic must be minimized when the new domain controllers are deployed.

You need to configure DNS for the Dublin office.

Which three actions should you perform in sequence? To answer, move the appropriate actions from the list of actions to the answer area and arrange them in the correct order. 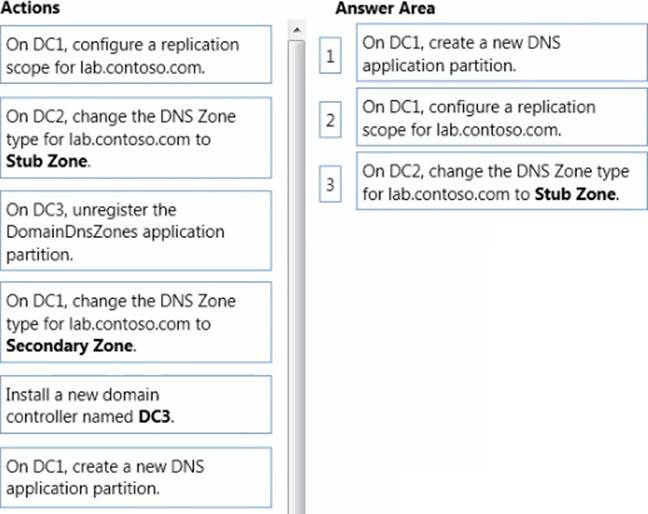